The easyHotel might fail to open because of its room size 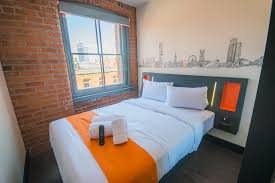 As far as budget accommodation goes, easyHotel on Howard Street is part of a UK chain and is associated with the conversion of offices into 81 double and family bedrooms.

Nevertheless, BBC News understands a “sizeable” number of its rooms are under the 13 sq meters fixed size in Northern Ireland legislation.

It’s expected to be opened next month; however its certification is currently in doubt.

All accommodation must be certified by Tourism Northern Ireland (TNI), with requirements mentioned in the Categories of Tourist Establishment (Statutory Criteria) Regulations (Northern Ireland) 1992.

Functioning without official approval is punished by a £2,500 fine or an imprisonment of up to six months.

Problems relating to room size, some of which measure nine square meters have been flagged up at board level within TNI.

“Developers and operators are referred to the legislation as soon as plans are submitted to Tourism NI, including any requirements outlined within the legislation relating to room size.”

The developers following easyHotel Belfast said they were “working closely” with TNI in terms of the certification process.

The hotel is advertised and marketed as “super-budget” accommodation and it is part of a chain which has extended in the UK and abroad using a franchise model.

It was introduced in 2005 by Stelios Haji-Ioannou, the man behind easyJet.