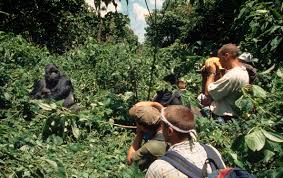 Two times recently, Virunga national park has featured the wonders of the Democratic Republic of Congo as it slowly re­opened after two decades of war. However, all visits to the oldest national park of Africa were stopped temporarily last week after the kidnapping of two British nationals. After two days, Bethan Davies and Robert Jesty were released.

Nevertheless, their guard, Rachel Masika Baraka, turned out to be the eighth ranger killed this year.

“It will take a huge amount of work to return to where we were heading,” explained Emmanuel de Merode, the British-educated Belgian prince who fought bravely to save the national park during a decade as its director. The suspension order formerly lasts till June 4 but the park will not be reopened until the safety of the visitors can be made certain. Few fear that could take a year or more.

De Merode, who has lived on two attacks on his headquarters by guerrilla armies and an attempt of assassination, explained the kidnappings as another “significant setback” for the park since tourism is important for its future. Visitor numbers have increased from almost negligible in 2014 to 10,000 in 2017. Of late, tourism generates $10m of a quarter of the park’s annual running costs, which comprise 800 rangers, six aircraft, a rapid-reaction force, a canine unit, an intelligence operation and a 24-hour operations centre.

Most importantly, it underpins De Merode’s striving initiations to develop jobs for the park’s 4m poor neighbors, efforts which comprise the construction of six hydroelectric plants around Virunga’s perimeter. “Widespread employment and economic development are the only things that can assist with the long-term stabilisation of the region,” De Merode said.