Thousands of passengers stranded at the Victoria station after signal failure 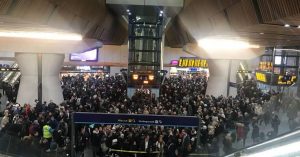 Thousands of passengers were struggling to get home as three of London’s busiest train station faced hours of delays and cancellations  on Wednesday evening.

After a ‘major signal failure’ trains in and out of Victoria and London Bridge were severely disrupted near the East Croydon.

At Victoria according to  the images posted images posted on social media showed hundreds of passengers held on the station concourse and were  unable to catch Southern, Southeastern and Gatwick Express trains.

At St Pancars there were chaotic scenes  during early evening as all southbound trains on the Thameslink connection were disrupted and Thameslink services out of London Bridge were badly hit.

Those passengers who were directed to go to Victoria saw worse travel chaos there.

A passenger stuck at Victoria said that it was the ‘worst transport chaos’ he experienced since the 1990s.

Britain’s second and fourth busiest stations were Victoria  and London Bridge which carried 75 million and 48 million passengers in 2017/18 respectively.

At Victoria there were angry scenes after a partition was pulled across the route to the Gatwick Express and Southern platforms. Staff tried to filter through arriving commuters and passengers were prevented from heading towards those platforms.

Trains running along the south coast from routes such as Eastbourne to Brighton saw a knock-on effect and Peter Kyle, the Labour MP for Hove and Portslade, was caught up in the disruption at Victoria.

The central London hub was described as being ‘at a standstill’ and apologized to those struggling to get home.