Thousands stranded in a cruise ship as standoff intensifies in Australia 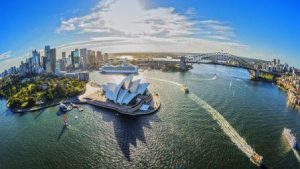 A cruise ship operator with six vessels stranded off Australia is calling on the nation to help evacuate thousands of its crew members as the coronavirus outbreak ravages the industry. Carnival Cruise said that it needs Australia’s help to bring crew to shore so they can return to their home countries, adding the government had a duty to act on humanitarian grounds.

Royal Caribbean Cruises Ltd. also has at least five vessels off the coast, and authorities in New South Wales state are concerned the health system may be overwhelmed with new virus cases should crew be evacuated too quickly.  Many countries have become increasingly reluctant to grant entry to cruise ships after the infection of more than 700 people on a vessel berthed off Japan showed how quickly the virus could spread. Australia has barred foreign cruise ships, but has been allowing domestic vessels and some ships that were at sea when the restrictions were announced to dock and disembark passengers.

Of almost 5,000 confirmed virus cases in Australia, about 10% are related to cruise ships. Hundreds of people have become infected after passengers were allowed to disembark a ship in Sydney before test results were known.

David Jones said that it is no one’s interest particularly its crew members to sail over the horizon to an uncertain future. This is based on humanitarian and compassionate grounds and in line with Australia’s international obligations as a maritime nation.

They are doing their best to make sensible decisions that won’t have an impact on the health of the rest of the people of New South Wales, he told.

According to the Australian, New South Wales authorities are planning to conduct a military-style operation to helicopter doctors onto eight cruise ships stranded off the state’s coast, and would test more than 8,000 crew members for the virus.