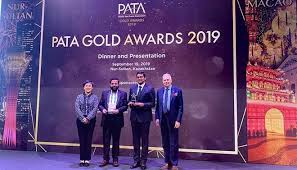 Kerala Tourism was awarded three Pacific Asia Travel Association (PATA) gold awards, including one for an ethnic food restaurant run by women at Kumarakom under its ‘responsible tourism mission’, in Kazakhstan.

The two other gold awards were for an advertisement campaign of Kerala tourism and for its website. The awards were received by tourism minister Kadakampally Surendran and tourism director P Bala Kiran.

“It is a big honour for Kerala Tourism and also a strong validation of the state’s image as an alluring tourist destination. I am sure these awards will give a huge traction in showcasing the touristy charms of the state to a wider international audience,” Surendran said.

There were 197 entries for this year’s awards from 78 organisations and individuals worldwide.