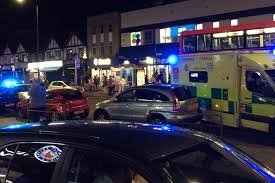 Three people have been injured following a shooting on a busy high street in northwest London. The Metropolitan Police and London Ambulance Service were called to reports of shots fired in Kingsbury Road, Brent, near to Kingsbury Tube station.

At the scene, the Metropolitan Police found three injured people. All have been taken to hospital and none are believed to be in a life-threatening condition at this time. The incident is not thought to be terror-related. The officers from Brent borough have launched an investigation the shooting alongside detectives from the Met’s Trident specialist gang crime unit.

Nearby Kingsbury tube station has been closed while police carry out enquiries in the area. The police in London have been fighting to stem a wave of violent crime that has swept across the capital this year.

Since the start of 2018, more than 80 people have died in violent circumstances in the city, including dozens in stabbings and several more killed in shootings. Hours earlier, police had been called to a report of shots fired in Kennet Road, Kilburn, around five miles away. The officers said no one was injured in the incident and the suspects had left the scene before police had arrived. An investigation is underway into the circumstances of the incident.