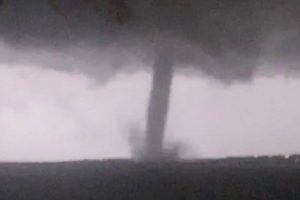 A tornado touched down Dallas on Sunday night causing structural damage and snapping electricity for tens of thousands of Texas residents.

No report of fatalities or serious injuries from Dallas has come yet. However, the damage is being assessed now.

The power company Oncor has said that around 112,000 people have been affected by outages. Classes were cancelled by some schools on Monday and report of gas leaks in some parts of the city has also come.

Dallas fire rescue department spokesperson Jason Evans said that the department was taking steps for structural collapse and saved seven people from it. He said that multiple people contacted the department through calls who had been injured in their homes due to broken glass.

According to meteorologist Jason Godwin, the twister struck the ground near Love Field Airport and headed northeast through the city. Several homes and businesses have been damaged and power lines snapped, and tree limbs have been found uprooted across roadways.

Authorities say that the size and severity of the tornado will be known once crew arrive to assess the damage.

The storm occurred as multiple thunderstorm watches and warnings were issued for four counties, including Dallas County. More stormy weather is expected in the area.

Some residents revealed that as soon as the tornado touched down the city, some buildings started shaking and some could also hear the sounds of windows shattering along with debris banging around.

Dallas police said that they were going door-to-door to check the damage caused by the tornado.

The authorities say that seven people escaped a mishap in northeast Dallas. The structure in which they were present collapsed. The fire-rescue department was carrying out a search operation to check whether anyone was left inside or not.

A convenience store was also found collapsed in the storm. However, everyone inside could get out safely on time.