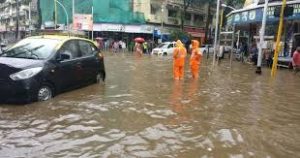 The National Weather Service issued a Flash Flood Warning as the storm hit, Bernama News reported adding that roads were drowned and the storm forced closures of many major arteries. Airports and rail networks were also hit, causing delays.

The American capital’s Ronald Reagan airport received around 83 millimeters of rainfall in just one hour, the NWS added in a tweet.

The main power vault of the National Archives building — which houses some of the most important The White House was not spared either. Footage posted by several correspondents and outlets showed puddles forming in one of its basements.

Emergency services said they received dozens of calls from citizens seeking help.
The rainfall and floodwaters subsided later in the day, as damage assessments began in the District of Columbia — where Washington is located — and neighboring parts of Virginia and Maryland.