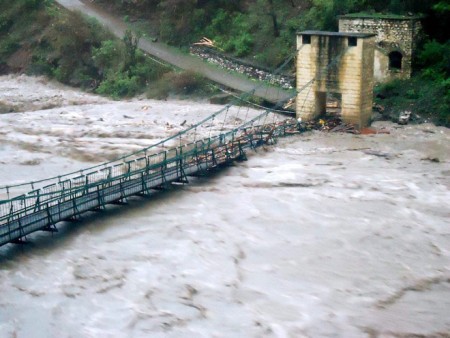 The northern Indian state of Uttarakhand has been lashed with torrential rains of late, in almost every portion of this place.
The violent natural calamity in this part of the world is likely to trigger landslides in the higher regions. Therefore the local government has urged the regional inhabitants as well as the tourists visiting this part of India to remain extremely cautious at this point of time.
Tourists particularly those in private vehicles are being advised to stick to concrete roads while people at large have been advised to exercise extreme caution on account of the heavy rainfall here.
Bikram Singha of India Meteorological Department in the state capital of Dehradun has mentioned that the state has received heavy rainfall in the last 24 hours as was predicted.
Therefore the government has decided to issue a red alert.
Landslides are a common occurrence in several parts of the state’s upper reaches. Roads get blocked with delays and even possible threat to life a reality around this time of the year. The worst of it was in 2013 when local life and tourism took a tragic hit during the June 16 and June 17 flooding. At the time, rampant construction and damage to river beds were primarily blamed for the natural calamity.