Home » Tourism is beneficial, but overtourism is a threat

Tourism is beneficial, but overtourism is a threat 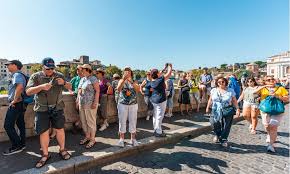 In 1953, mountaineers Tenzing Norgay and Edmund Hillary made the first confirmed summiting of Mount Everest, which is the world’s highest peak. Recently, Everest has become so popular that huge lines of climbers are waiting to conquer that same peak. On rarefied ground where once only Norgay and Hillary treaded, now climbers are dying because of overcrowding.

The number of international tourist arrivals has been increasing steadily since the mid-20th century, and totaled about 1.4 billion in 2018. Europe has witnessed the biggest share, but the Asia-Pacific region is growing fast.

This growth has been driven by a lot of factors. Disposable incomes have grown around the world, with China’s gains being especially impressive in the recent years. People are now living longer and having fewer children, and this is giving them the time and freedom to travel more. Areas that were once off-limits, are now are accessible.

Technology has also played a pivotal role. Air travel is now cheap and present almost everywhere. Tickets, hotels, tours and local transportation can now be booked online. The internet has also given the masses easy access to information about global tourist destinations, from Japanese hot springs to Iceland’s glaciers. Google Maps has made it much easier to find one’s way around an unknown country, and translation apps have made foreign-language communication less intimidating. Uber offers easy transportation in many international cities and Airbnb has expanded the choice of available accommodations.

Tourism is now a big business for countries that manage to attract hordes of visitors. The WTTC estimates that the amount of economic activity attributable to the tourism sector is much larger, reaching $8.8 trillion in 2018, and supporting as much as 10% of all jobs in the world.

However, tourism has its downsides too. As the Everest example shows, travel to the most popular destinations is subject to what economists call congestion externalities. When you visit a famous place, your presence makes the experience just a little less convenient and comfortable for everyone else.

For cities, such experiences can be even more distressing. Even though tourist dollars flow into local businesses, mobs of travelers are damaging infrastructure that was never built to handle so many human bodies. Hence, overtourism is now a huge concern for many popular destinations.