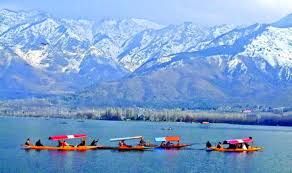 With an aim to promote Jammu and Kashmir beyond highly favored tourist locales tourism department has started focusing on the seasonal fruits and handicrafts to lure tourists.

It has currently introduced a social media campaign with photographs, videos and other messages about the crafts and fruits of the state, flowers and much more to make it alluring to tourists.

Secretary tourism of this northern Indian state Rigzin Samphel has mentioned that there is an urgent necessity of an overhaul to trigger visitors’ interest in this state.

Keeping this in mind, he added, he had decided to promote the state beyond destinations and had launched a giant social media campaign for this purpose. He asserted that the state tourism department is promoting regional handicrafts, flora and fauna in a great way through its various social media platforms that have a large fan following.

The campaign not only helps tourism department but its allied sectors like floriculture, horticulture, and handicrafts for overall boost of state’s image,” he added.

He also appealed visiting Amarnath pilgrims to enjoy local seasonal fruits available in the markets and explore state beyond the doted destinations.

Director tourism Kashmir, Mahmood Ahmad Shah, who is dealing with social media for the department said the state has much more to showcase beyond its physical beauty and landscaping, for instance horticulture, floriculture and handicrafts are also biggest stake holders of tourism industry.

He said the new campaign was launched few days back and photographs and videos taken by the professional of local seasonal fruits, flowers, handicraft items are being regularly posted on all social media platforms of the department.