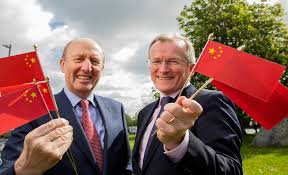 Tourism Ireland has announced that it has joined forces with WeChat, which is a popular social media platform in China, for attracting more Chinese tourists to the island of Ireland.

“The partnership involves a new mini-program on WeChat, called ‘Explore Ireland’ – designed to make it as easy as possible for prospective Chinese visitors to choose the island of Ireland,” said Tourism Ireland.

The online guide provides information on visas for traveling to Ireland, along with festivals, hotels, tourist attractions, map navigation, and a translation function. Tourism Ireland added that Chinese visitors to Ireland can also complete their tax refund on any purchases made in Ireland within the mini-program.

China is the largest outbound travel market in the world, and thus, Tourism Ireland is committed to tap into that market over the coming years, said Aisling McDermott, Tourism Ireland’s Manager Asia and Middle East.

“Given the importance of social media in China, we are delighted to partner with WeChat to raise awareness of the island of Ireland among Chinese travellers,” said McDermott.