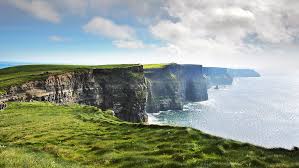 Tourism Ireland has said that it aims to grow the number of overseas visitors to Ireland to 12 million by the year 2022.

Ireland also hopes to increase its overseas tourism revenue to 6.54 billion Euros (about $7.25 billion) within the next three years.

The plans were announced at an event that was attended by some 500 tourism industry leaders from around the country.

Tourism Ireland estimated that in 2019, the revenue generated by international visitors to the island of Ireland will drop to 5.78 billion Euros from last year’s 6.1 billion Euros while the number of the overseas visitors will remain almost at last year’s level of 11.2 million.

For achieving its goals, Tourism Ireland will launch a number of marketing measures including more focus on less visited attractions and locations in Ireland and redevelopment of its Ireland.com website which annually attracts over 20 million viewers.

For tourism development, the Irish government has increased its funding for the tourism sector to 186 million Euros for the next year, said Brendan Griffin, the Irish Minister of State for Tourism and Sport.

Of all the overseas visitors to Ireland last year, about 2.2 million were received by Northern Ireland.