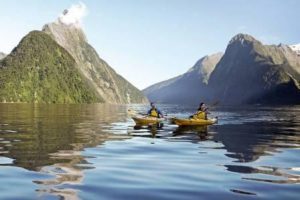 The tourism in New Zealand has become the backbone of many communities, providing work and significant economic contribution.

Tourism is a dynamic sector that offers a range of careers, it’s fantastic to see that so many Kiwis gaining skills and experience.

More encouraging for operators, the figures also showed that international tourist spending was rising faster than the number of overseas visitor who contributed $16b of the total amount spent. The spending grew at 7.7 percent over the previous year while visitor numbers increased at 3.6 percent.

The spending boosted turnover at local shops, cafes and community services, including doctors, car repairs, and laundromats. The tourism Industry Aotearoa communications manager Ann-Marie Johnson said it was a continuation of the spectacular growth enjoyed in recent years.

The Tourism Satellite Account is the official annual measurement of the New Zealand tourism industry, compiled by Tourism Statistics NZ. It includes tourism spending, the number of people employed directly and indirectly by tourism, tourism’s share of export earnings, and its contribution to GDP.

The figures shows that annual tourism spend is now $10.5b a year more than it was in 2014 – an extra $29m dollars a day being spent in communities across New Zealand. The tourism now provides 20.6 per cent of total exports. It makes a direct contribution to GDP of 6.1 per cent and a further indirect contribution of 4.3 per cent.

In 2014, the association  set a goal of being a $41b industry by 2025. The number of sign-ups to TIA’s sustainability has hit 700, and the recent introduction of the Tiaki Promise led by seven tourism organisations, outlining what travellers can do to travel safely and be guardians of the land, waterways and ocean. The top six visitor markets were Australia, China, USA, UK, Germany, Japan.