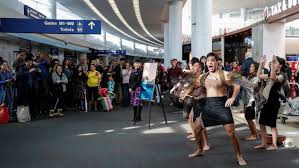 Finance Minister of New Zealand, Mr. Grant Robertson and Tourism Minister, Mr. Kelvin Davis has recently given their reassurance to the representatives from the tourism sector, airports, and Air New Zealand in a meeting at the Beehive this evening.

“It was a very positive meeting and a good exchange of ideas and views,” Davis informed the reporters. “Everyone is realistic. Everyone knows that this is a global situation and that the best thing we can do is continue to have these conversations together.”

The tourism of NZ has been badly affected by a drop in visitor numbers majorly because of the temporary ban on international travellers coming from mainland China. Last week, the government declared of $11 million funding as boost up to Tourism New Zealand in trying to respond to the shortfall.

While speaking to the media experts after the meeting, the ministers said everyone agreed Tourism New Zealand now ideally should turn its attention on attracting visitors from North America and Australia.

“Those markets are still open. People are still visiting us from there, so we’re looking to capitalise on that,” Davis said.

Also, we are planning on how best we can fully re-engage with China when that was safe to do, Robertson said.

“So that’s very important for us have a co-ordinated approach to that.”

Robertson further explained that none of the participants at the meeting had asked for more direct help, but that could be on the table, if the situation took a turn for the worse.