Home » Tourism will be the key economic driver for Malaysia

Tourism will be the key economic driver for Malaysia 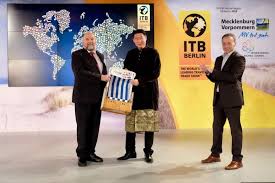 The new government of Malaysia under the aegis of Prime Minister Tun Dr. Mahathir bin Mohamad is making efforts to boost the tourism industry.

Malaysia is the Official Partner Country of ITB Berlin 2019 and the World’s Leading Travel Trade Show will be held from 6th to 10th March 2019.

One of the steps taken in this direction is improvement of the air travel. The government is partnering with various airlines to increase the number of scheduled air services and chartered flights.

The Malaysia’s Minister of Tourism, Arts and Culture, YB Tuan Mohamaddin Ketapi said “The Malaysian government is offering special incentives to attract international airlines.” He added that by June 2018, there will be 2.8 million seats per month which is almost 14 percent increase from June 2017. He confirmed that Germany’s Condor airline will fly from Frankfurt to Kuala Lumpur from early November.

The deputy prime minister Dato’ Seri Dr Wan Azizah binti Dr Wan Ismail emphasized the fact that tourism is the key economic factor. She said, “We aim to continue maintaining good bilateral ties with all countries and to grow as an international platform for partnerships, trade and investment” . The government envisages 30 million tourists by 2020 as compared to 25.9 million tourists in 2017.

Another aspect of tourism that the Malaysian government is working on is the hotel industry. As per Dr. Wan Azizah 250 new hotels have been added since 2017, and 130 hotels with 26,000 rooms are in the pipeline. The government is promoting tourism through social media.

She pointed out that Malaysia has a favourable exchange rate which makes it a value-for-money destination. High quality food, hotels, and holiday attractions in Malaysia are available at economical prices.

Malaysia has been awarded the title of Preferred Destination Partner of the European Travel Agencies and Tour Operator’s Association (ECTAA). Malaysia’s partnership with ITB Berlin, well known hotel brands, and TUI cruise will give wings to its vision of boosting tourism.