Tourist spots in Paris to close on weekend amid fuel riot 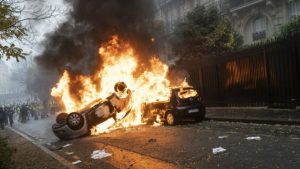 France is bracing for yet another weekend of protests that could hurt Paris tourism business and other parts of the country.

Prime Minister Edouard Philippe said the government was deploying 89,000 troops across France — including 8,000 in the capital to control the situation.

Many of the popular tourism sites– including the Louvre, the Eiffel Tower, the Musée Delacroix and the Paris Opera — will close over the weekend in advance of the protests, organized by the “gilets jaunes” or “yellow vests” movement. Their name comes from the high-visibility yellow vests that drivers are required to keep in their vehicles for safety reasons.

The nationwide, some 630 people were arrested and more than 260 were injured, including 81 police officers, in protests last weekend, the third consecutive week of such demonstrations. There have also been four accidental deaths, according to officials. Three of them resulted from traffic accidents related to the blockades and the fourth was an 80-year-old woman who died in Marseille after being hit by a tear gas canister that came through her window.

The demonstrations began as a form of grassroots opposition to rising gas prices and planned increases in taxes on polluting forms of transport, but they have since evolved into broader demonstrations against the government of President Emmanuel Macron.

He appeared to back down Wednesday, announcing the fuel taxes would not be introduced in 2019. But the movement now appears to be about more than just taxes; it’s exposed the growing divide between Paris’ metropolitan elite and the country’s rural poor.

Maxime Nicolle, a member of the gilets jaunes, said that the things are definitely not backing down now. The moratorium is useless. The people want a referendum, a referendum on Macron, the senate and the national assembly.

Many of those protesting have been people who moved out of Paris and into the suburbs due to rising real estate prices.

The suburban protesters, like those from rural areas, argue that they’re disproportionately affected by the now-shelved gas tax, as they rely on gasoline and cars much more than city-dwellers. It’s unclear if the demonstrations will be as violent or as large this weekend as they have been previously. The number of protesters peaked last month but has been slowly on the decline. Since mid-November, 1,648 people have been injured in total, including 552 police officers, the Interior Ministry said. More than 1,600 people have been taken in for questioning and 1,387 have been arrested.

Small retailers, hotels and restaurants have all seen their takings fall significantly as a result of the protests, according to the French Ministry of Finance.