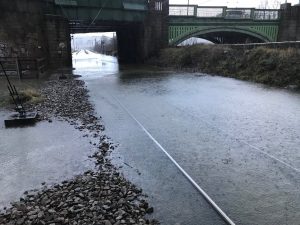 Network Rail has reopened the line in Kirkstall this afternoon (Monday, 10 February) after the railway was severely impacted by floodwater over the weekend.

Services through Kirkstall, on the Leeds to Ilkley, Leeds to Skipton, and Leeds to Bradford Forster Square routes, were suspended to allow Network Rail teams to pump water from the railway. As the deluge of water was from the river, pumping was only effective once the river levels started to drop.

Work has also taken place to check trackside equipment for any damage. This could only be done once the water levels had receded.

Some services are now able to run on the line; however, a full service is not yet running. Passengers are strongly advised to check via National Rail Enquiries or with their train operator before travelling. A full service is expected to be running by peak time this evening.

Matt Rice, Route Director for Network Rail’s North and East Route, said “Storm Ciara has caused widespread disruption across the country and our teams have been working nonstop to keep passengers moving safely.

“We are pleased to confirm that the line has now reopened at Kirkstall following severe flooding. Whilst the line has reopened, a full service isn’t expected until later this afternoon, so we encourage all passengers to check their journeys before travelling.

“We would like to thank passengers for their patience, as we work with train operators to get a full service running as soon as possible.”