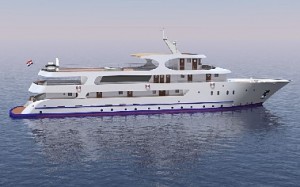 Croatia’s award-winning DMC and small ship cruise company, Katarina Line, is offering free FAMs to agents who travel with a companion on three of its Deluxe cruises in Croatia. As part of the promotion, agents stay free and their companions receive 30% off the double occupancy rate. After the discount, the companion rates start at $1,151. Agents can also earn an extra 10% commission in addition to their regular Katarina Line commission for every client they book on these cruises. All prices are based on the latest currency exchange rates and other restriction may apply.

The FAMs are available on regularly scheduled departures, allowing agents to experience the cruises just as Katarina Line guests do. They explore the country’s spectacular coastline and historic towns and visit many of the extraordinary islands of the Adriatic Sea. Eligible tours include the July 14 – 21 Adriatic Explorer; the August 4 – 11 Northern Gem; and the August 11 – 18 Dalmatia Paradise.

Prices include buffet breakfast and three-course lunches daily, a Captain’s dinner, numerous excursions and admission fees per itinerary, and daily cabin service, among other amenities. Agents spend mornings cruising from port to port and swimming in the blue waters of secluded coves. Later, they enjoy guided tours in towns that are full of old-world charm, history, culture, and culinary traditions. Excursions also include tours of national parks and other World Heritage sites.

The Adriatic Explore FAM, July 14 – 21 on the MV Admiral Deluxe cruiser, departs from the fashionable resort town of Opatija and ends at the walled city of Dubrovnik in southern Croatia. In between, it visits the island of Rab, known for its prominent church bells, as well as the coastal town of Šibenik – the gateway to the Kornati Islands – and the island of Korčula, among others. Excursions include a guided tour of Krka National Park, renowned for its seven spectacular waterfalls.

The Northern Gems FAM, August 4 – 11, is a round-trip cruise from Split on the deluxe MV My Way cruiser. The cruise visits the old town of Trogir, famous for its mix of Renaissance, baroque and Romanesque buildings; the village of Rogoznica, Krka Waterfalls and the “nautical paradise” of Kornati National Park. It also visits the city of Zadar, known for its Roman and Venetian ruins.

The Dalmatia Paradise FAM, August 11 – 18, also on the MV My Way, is a round-trip cruise from Split. In between, the ship docks at Korčula, Dubrovnik, the island of Hvar, and the town of Bol on the island of Brač, among other ports.

“The Dalmatian Coast offers dramatic views and some of the best watersports in the world,” said Daniel Hauptfeld, marketing director for Katarina Line. “We’re always eager to host travel agents, who account for more than 98% of all our bookings. We want them to see for themselves the beauty and charm of Croatia, so that they can sell Croatia with confidence.”

Katarina Line features a larger fleet for 2018 and guaranteed weekly departures from mid-April through mid-October, with convenient and seamless transfers to all of its customizable land tours. Its fleet ranges from luxury Deluxe Superior cruisers with a capacity of up to 38 passengers to intimate gulets that cater to as few as seven passengers.