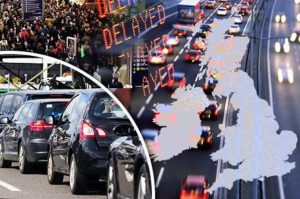 There will be chaos and disruption on the roads and railway as around 13 million trips by car are expected this weekend by Brits.

Across the rail network there will be disruptions as engineering works will be carried out. There will be no trains to or from London Euston.

Friday was expected to be the busiest with around 4.4m separate journeys by car  which was 1.5m more than the same day last year.

Travel between 4pm and 7pm is advised to be avoided.

He went on saying that despite it appeared that the weather would take an usually cold turn for the start of May – certainly after the recent Easter heatwave – their figures suggested drivers were still keen to make the most of the long weekend, with significantly more saying they had plans of  a leisure trip by car this year than in recent years.

There was a risk that the drivers will be suffering their own ‘motoring mayday’ if they don’t remain careful as chances of colder nights were expected which will cause some older car batteries to finally give up. This will disrupt the plans for a getaway.

Temperatures are likely to rise during the day and it isn’t due to be a washout.Roads should be availed when they are quieter and those travelling great distance should set off earlier on Saturday.

Network Rail will take the opportunity of the short holiday to complete engineering works and it is expected that the train journeys will also be affected.

Both to and from London Euston there will be no trains and the services in the London St Pancras International will be reduced on East Midlands trains.

To and from Glasgow central there will be amended services that will include diversions and suspensions.

There will be other engineering work taking place over the first May bank holiday weekend like track renewal work in the south west.

Network Rail chief executive Andrew Haines stated that passengers want and deserve a more reliable railway, and over the May bank holidays thousands of railway workers will be out on the track and working behind the scenes to deliver just that.

Most of the railway network will remain open but some routes will be closed so those thinking of travelling should plan ahead.

Between Bristol Parkway and Newport the buses will replace trains and there will be disruption to trains from London to South Wales.