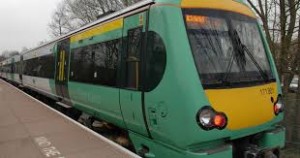 Southern Rail is again under attack for failing to manage the long-planned Network Rail engineering work which closed the London-Brighton main line just south of Gatwick.

There are thousands of passengers heading from the capital city to the south coast to enjoy the sunny weather faced waits of up to two hours for replacement buses.

As crowds built up at Britain’s second-busiest airport, Southern Rail, which runs trains on the main line from London Victoria to Brighton requested passengers not to travel towards Brighton.

The travellers who wanted to go no further than London to Gatwick in order to catch flights were aghast to be told: Some trains running from London to Gatwick Airport will be cancelled to prevent further overcrowding.

The fast trains between Victoria and Brighton normally take 54 minutes. The journey on Sunday, with a bus covering the three-mile journey south from Gatwick Airport to Three Bridges, was scheduled to take twice as long. But many travellers found it was much slower.

Laura Paterson, director of a language school in Brighton, made a protracted day-trip to London.

A spokesperson for Govia Thameslink Railway, which operates the Southern franchise, said that they are anticipated that the service would be busy and given the engineering works and need for rail replacement bus services from Gatwick Airport to Three Bridges we put a queuing system in place at the station.

The number of passengers at the station reached a peak of between 1,500 to 2,000. It is equivalent of two or three trains, with queuing times up to one hour.

A further 30 buses were brought in to supplement the 60 originally planned.

The spokesperson said that they are sorry that passengers travelling to the south coast had to queue for longer than normal for rail replacement buses.

Similar chaos developed in last February when the line north of Gatwick was closed. With insufficient buses to the airport from Redhill, local residents offered lifts to distraught passengers.

The planned engineering works between Gatwick Airport and Three Bridges continued. The additional “contingency buses” deployed on Sunday and this service is also available on Monday.