Travel chaos on the cocktails of Arctic freeze in UK 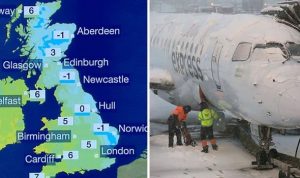 High pressure over Scandinavia and Iceland is driving the Arctic chill towards the UK. The Arctic vortex can trigger winds of up to 60mph this week. Heavier rain, stronger winds and possibly hill snow by Thursday.

Wintry showers are expected in parts of the country between Wednesday and Friday.
The western area, could witness rain and strong winds on Tuesday evening.

Freezing temperatures will bring heavy gales and wind gusts up to 60mph. It will lead to severe travel disruptions.

There could be snow towards the end of the week, specially in the north across Scotland and parts of northern England.