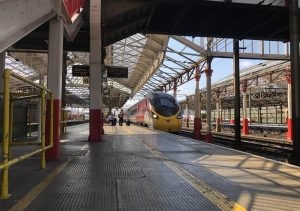 Due to a 16-day engineering project starting on Saturday July 20travellers between London and Glasgow will face extended journeys and disruption. The West Coast main line between Crewe and Warrington will remain close.

The upgradation  project of Network Rail at Acton Grange junction will make the system more reliable.  However, between Saturday July 20 and Sunday August 4 the work will be disrupting Virgin Trains’ Anglo-Scottish services.

Train between London Euston and Glasgow Central will still run but it will be diverted via Manchester.   There will be an extension in the usual journey time of under four-and –a half hours  by an hour.

Between Crewe and Preston the rail replacement buses will ply non stop. There will be cancellation of Virgin Train services to Blackpool throughout the project.

There will be disruption in links from Chester to Manchester  and the . Caledonian Sleeper services will be diverted via Manchester.

On Friday July 19 Virgin Trains can expect a very busy day partly due to the planned work, and another peak on Monday 5 August when the work ends.

August 23 will be extremely busy which is a day before the bank holiday. LNER which is the East Coast main line operator expect the busiest summer days on its main routes from London King’s Cross to Leeds and Edinburgh on July 26 and August 22 and 23.

The peak days will be around the bank holiday on the Western line from London Paddington to South Wales, Bristol, Devon and Cornwall.

A GWR spokesperson said that unlike Christmas and Easter they tend to see demand spread across a much wider period during the summer; with a pick in numbers travelling at the end of the summer holidays, and spikes tying in with key events.