Home » Tribals protested about the new eco-tourism project in the Amrabad Tiger Reserve!

Tribals protested about the new eco-tourism project in the Amrabad Tiger Reserve! 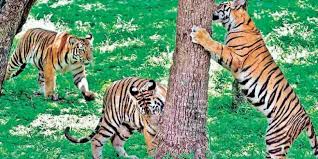 The construction of the mega “ecotourism project” with a huge cantilevered glass bottomed walkway deep inside the Amrabad Tiger Reserve, Mahbubnagar, Telangana, being executed by the Tourism Department, seems to have turned into a nuisance for some of the scheduled tribes of the region, the Chenchu tribals, the traditional dwellers in the Nallamala forest that encompasses the reserve.

Few tribals of the region, who heard the borewell digging loud noise that was driving wild animals towards their huts and rooms in Farhabad area expressed their objection and wanted the work to be stopped right away. In spite of it, these tribals have been facing serious pressure from the tourism and forest department officials to keep out of the region.

To promote ecotourism, the tourism department of Telangana has taken up building of a glass-bottomed cantilevered walkway at the Farhabad View Point, inside the core area of the tiger reserve. It was learnt that borewells that are about 40 deep have been dug so far at the location to lay the foundations for the walkway. However, no work is on at the site at present.

It may be reminded that the Deccan Chronicle reported on February 13 on the construction of the walkway, which infringes the guidelines of the Supreme Court that prohibit any new construction activity within the core areas of tiger reserves in India.

To note, after the tribes pointing out that rig noises were driving wild animals towards their homes, the Chenchus had to undergo a “counselling” session by the police not to create a major problem of the new “ecotourism” attraction. The forest department requested local police following a complaint from the tourism department on the “nuisance” from Chenchus.

“We are not allowed to even build a room for ourselves in our forest. The forest department says nothing new can be built because it is the core area of the tiger reserve, but big projects are being allowed,” a Chenchu tribal leader said.

The Chenchu leader also pointed out that even the local Eco-Development Committee (EDC) comprising Chenchus, are not getting a share from the Rs 1,200 per trip safari rides in Farhabad operated by the forest department. According to the norms, a section of all revenue from ecotourism activity – of which safari rides comprises a major part are to be shared with the local EDC.

Also, it was learnt that the drilling rig workers spent the nights over the three days at the worksite. “Nobody is allowed to stay in the forest after 6 p.m. But in this case, the workers stayed back with no one questioning them,” a source said.

Typically by sundown, the forest department claims that anyone including the wildlife researchers, have to leave the forest area. The only ones allowed to stay or enter the reserve are Chenchu tribals whose hamlets are inside the reserve.