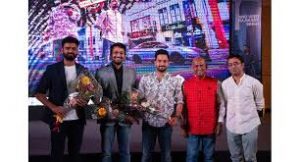 Travel community Tripoto has collaborated with the Singapore Tourism Board, to come up with an innovative, fun and exciting travel web series ‘Trails 2 Passion – Singapore Redefined’. The seven-episode, web-series showcasing the experiential exploration of Singapore by Naveen Kasturia and Veer Rajwant Singh, well known faces of internet web series scenario, was aired on April 1, 2019.

Speaking about the experiences Naveen Kasturia, says, “When Tripoto approached me for this project, I didn’t give it a second thought. I said yes as I knew I had to do it. It is for the first time that I have done an experiential travel show and it has been quite an experience.

As an actor, I had my moment of truth and got a chance to improvise and be spontaneous in front of the camera. Travel puts a lot of things into perspective and shooting for this show made me explore Singapore by breaking off the monotonous schedules I am used to following. Veer and I had a blast travelling through Singapore, revelling in the culture and the offbeat experiences this place had to offer. I am sure our audience too will be left awestruck following our travel trails through Singapore.”

Adding to his experience Veer Rajwant Singh, says, “I’ve been wanting to do a travel show for some time. It’s because you are not merely acting, you are living your passion and enacting as is. I explored a whole new side of me in Singapore in an entirely different light.

Most of my shots were the real-time reactions to the experiences curated. Not only did I try some cool adventure activities, but I also came in touch with glocal experiences, more of which you will see in Trails 2 Passion – Singapore Redefined.”

Michael Lyngdoh, Co-Founder, Tripoto, says, “Tripoto and STB are collaborating to showcase a different side to Singapore. It is an amalgam of exciting culinary experiences, adrenaline pumping adventures and beautifully diverse cultures packed into one city.