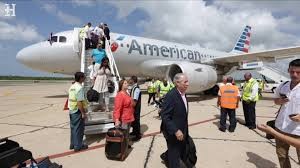 Trump administration opposes a Senate bill which would require new rules in prohibition of airline fees.

According Trump administration, the new rules are not “reasonable and proportional” along with many other new consumer protections that the administration deems “unnecessary and wasteful”.

The U.S. House in April passed a bill to reauthorize the Federal Aviation Administration by a 393-to-13 vote. It now moves to the Senate, which could take up the issue as early as next month. The Senate Commerce Committee in July 2017 passed a version of legislation to extend the FAA.

The bill said the government must review whether fees are disproportionate to the costs incurred by the air carrier.

The DOT’s deputy general counsel, James Owens said that the provision represents a giant step backwards, presents a risk of even wider re-regulation of the airline industry, and ultimately would harm air carriers and consumers alike.

Airlines for America, an airline trade group representing United Airlines Inc, American Airlines Group Inc, Southwest Airlines Co and others, said previously the provision would result in “government-mandated price controls” and should be rejected. The House bill does not have the provision.

The revenues from baggage and reservation change fees have increased from $5.7 billion in 2010 to $7.5 billion in 2017. It is said that both bills have a number of consumer mandates that are “unnecessary and wasteful” and “would constitute significant regulatory overreach.”

The Trump administration called the provisions that would bar airlines from denying seats to passengers who have already checked in or were cleared by the gate attendant to board “objectionable” because it would make it more difficult or prohibit airlines from continuing the practice “of overselling their scheduled flights to compensate for ‘no shows.’”

The proposals were prompted by indignation following the forcible removal in April 2017 of a United passenger from his seat in Chicago. United Airlines has since banned the practice.

Both bills would require the department to issue regulations permanently banning mobile phone calls onboard planes. The letter called that “problematic,” noting that the Federal Communications Commission has not approved regulations to permit calls.