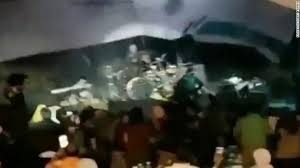 The tsunami struck the islands of Java and Sumatra in Indonesia on Saturday evening local time. Sutopo Purwo Nugroho, from the Indonesian National Board for Disaster Management, said the western coast of Banten province in Java, was the worst-hit area. It is believed to be Indonesia’s most populated island.

As per the latest news, at least 222 people have been killed and another 843 injured, leaving a trail of widespread destruction across the Sunda Strait region. The victims are spread throughout the Pandeglang, South Lampung and Serang regions. Vice President Jusuf Kalla has warned that the death toll will ‘likely increase’.

A statement on the Foreign Office’s website said: “The coastline around the Sunda Strait which lies between Java and South Sumatra experienced a tsunami/high-tide, with damage and casualties reported.”

There are many active volcanoes in Indonesia, and any of them can erupt with little or no warning. People have been advised to follow the advice, alert of local authorities, and media reports including any of the exclusion zones.

Anak Krakatau volcano seems to be at the centre of this devastation. Anak Krakatau is a volcanic island located in the Sunda Strait between the islands of Java and Sumatra in the Indonesian province of Lampung.

As per the Indonesia‘s geological agency the volcano erupted for two minutes and 12 seconds on Friday and produced an ash cloud 1,300ft (400m) above the mountain. The underwater landslide occurred around 9.30pm local time (2.30pm GMT), according to government officials.

The members of the popular Indonesian rock band, Seventeen, also died after waves washed away the stage, the band while they were performing at Tanjung Leisure beach. It is indicated that the five-metre wall of water washed at least 20 metres inland across the stretch of coast.