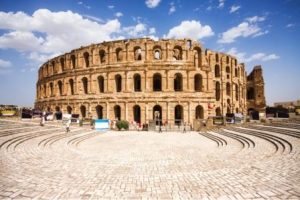 Tourism is one of the biggest contributors to Tunisia’s economy. Unfortunately in light of the coronavirus pandemic, the tourism sector has been harshly affected, similar to the rest of the world. According to official reports, the Tunisian tourism sector is at the risk of losing $1.4 billion and 400,000 jobs in 2020. The country has already sought a loan guarantee from its bilateral partners to issue sovereign bonds this year.

Tunisia’s central bank governor and finance minister recently sent a letter to the International Monetary Fund (IMF). They have mentioned that country’s economy will shrink by up to 4.3%, which can be considered as the deepest recession it has faced since its independence in 1956.

Nizar Yaiche, Finance Minister, Tunisia said in a press statement that the country is in talks with the IMF regarding a new program that includes international bond offering as one of the options. He mentioned that Tunisia is hoping to commence a discussion about a new program that would reflect the vision and the strategy of the new government as soon as possible. He also added that with the support of the IMF the next phase of recovery is bound to be positive.

Since the COVID-19 pandemic destroyed the markets, Tunisia’s Eurobonds have sold off heavily. The yield on Tunisia’s euro-denominated bond has almost doubled to more than 10%, from the all-time low of 5.8% reached in February. The bond has been issued last July and is due in 2026. The country is planning to regain the confidence of markets immediately.

In a time when its Eurobonds are trading close to distressing levels, issuing new securities would further make the situation complicated and expensive. In addition, the major damage in tourism, agriculture, and other industries important to the economy has created a serious crisis for the new government.

On April 10, The IMF has already approved a $745 million emergency loan to support Tunisia’s response to the outbreak and ensure international reserves remain adequate. It mentioned that the fiscal deficit in Tunisia will rise to 4.3% of GDP this year, compared to 2.8% originally expected, due to the need for extraordinary expenditures over this crisis.

The North Africa country is also under lockdown at least through April 19. The coronavirus outbreak has battered its tourism sector which represents nearly 10% of gross domestic product (GDP) and is a key source of foreign currency. As part of its 2020 budget, Tunisia plans to issue bonds worth up to 800 million euros ($877 million), but no particular date for the issue has yet been provided by the officials.