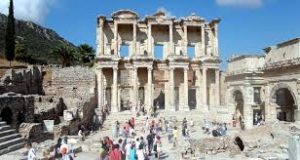 According to the European Travel Commission's (ETC) &quot;European Tourism
in 2018: Trends &amp; Prospects&quot; report, the number of tourists visiting Turkey
hit an all-time high last year, increasing by 22 percent year-on-year. The report said that the number of tourists visiting Turkey exceeded 40 million for the first time totaling 47 million in 2018.

The ETC highlighted that Turkey recovered speedily from the effects of the July 15, 2016, coup attempt. Turkey saw a significant increase in arrivals, particularly from Russia. The number of Russians visiting Turkey was 1.7 million higher than prior peak levels. Around 6.4 million Russian tourists visited Turkey in 2018.

Hotels have increased average room rates (ADR) in both Turkish lira and euro terms in the month of December as well as in 2018 as a whole. Turkey remains among the cheapest destinations within the accommodation dataset.