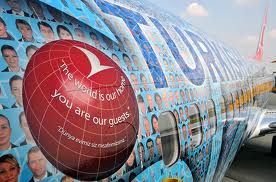 In January 2013, Turkish Airlines continued to post impressive growth statistics as shown by the following metrics.

The number of international passengers increased by a stunning 34% in comparison with 2012.

In 2012, the number of passengers exceeded 39 million, which was the target for 2013. Turkish Airlines has therefore exceeded its own prediction.

The number of passengers carried in International Business and Comfort Class grew by 22% and transfer passengers at THY’s Istanbul hub increased by 42%.

The available seat kilometers in January 2013 increased by 24%, from 6.8 billion to 8.4 billion. Domestically, the increase was 10% while the international offer grew by 26%.