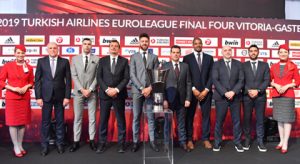 The heat is on as the Turkish Airlines EuroLeague Final Four kicks off today in the delightful Basque city of Vitoria-Gasteiz, Spain. Europe’s highest-level basketball tournament will run on May 17th and 19th where the best four teams of Europe, Fenerbahce Beko Istanbul, Anadolu Efes Istanbul, CSKA Moscow and Real Madrid will compete for the championship title. The historical Fernando Buesa Arena will provide the stunning backdrop for what will be a thrilling competition in front of 15,000 spectators.

A whole host of exciting activities are ready to greet visitors and basketball fans around the city. Throughout the arena area, challenging games and activities are set up and in the FanZone stands a giant Basketball themed ball pool ready for those who dare to swim through, observed through the transparent sides by onlookers. A range of promotions and surprises around the city and airport from a giant and impressive Turkish Airlines logo welcoming airline passengers at the airport, to Miles&Smiles giveaways around the medieval centre of Vitoria-Gasteiz greet visitors and locals alike. The Turkish Airlines EuroLeague is followed with great interest internationally with the Final Four broadcast by more than 31 partners, including Facebook, SPORT24 inflight and cruise ships and EuroLeague.TV worldwide across 193 countries and territories.

Turkey’s national flag carrier is dedicated to some of the world’s best athletes and sports teams and competitions, drawing parallels to its own values of passion, ambition, determination and sportsmanship.

As the proud title sponsor of the Turkish Airlines EuroLeague and the Final Four tournament since 2010, Turkish Airlines is also committed to many other prestigious global sporting events having sponsored the Super Bowl since 2016, UEFA EURO 2016, Rugby’s Challenge Cup, the European Rugby Champions Cup, and Chio Aachen World Equestrian Festival. The world of golf has been supported at the Turkish Airlines Open since 2013, and the airline organises its own World Golf Cup.

M. İlker Aycı, Turkish Airlines’ Chairman of the Board and the Executive Committee, said; “The excitement and energy from Basketball fans is palpable throughout the lovely streets of Vitoria-Gasteiz today. We are thrilled to be here as title sponsor of the Turkish Airlines EuroLeague Final Four, a culmination of months of training and energetic qualifying games to compete for the prestigious title. Sporting competitions like this remind us the dedication, the sacrifice and the passion, which are all crucial for being excelled in a sport, as well as the significance of teamwork, understanding and empathy to achieve the ultimate success. As Turkish Airlines, if we stand for a leading airline today that is due to having all these qualities, which we strive for their permanence. We wish the very best to all the teams competing with all these values over the next couple of days. May the best team win!”

Jordi Bertomeu, Euroleague Basketball President and CEO noted; “I would like to welcome everyone to the 2019 Turkish Airlines EuroLeague Final Four here in Vitoria-Gasteiz. One more year we have worked very hard to bring an unforgettable experience to all our fans, which wouldn´t be possible without the support of our partners and specially Turkish Airlines. Our title partner will be present during the whole event adding value to the overall experience as they have always done during the last 9 years of our formidable partnership.”

Fenerbahce Beko Istanbul and Anadolu Efes Istanbul will kick off the Final Four games with the first game to be played on Friday, 17 May at 18.00h (local time), followed by Real Madrid and CSKA Moscow at 21.00 on the same day. The Championship Game takes place on Sunday, 19 May at 20.30.