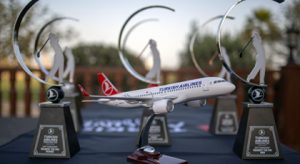 Turkish Airlines, flying to more countries and international destinations than any other airline, brings the much-anticipated Turkish Airlines World Golf Cup for the seventh time on November 4–5, 2019 to Antalya.

Over eight thousand players from around the world – all VIPs invited by Turkish Airlines – have competed in more than 100 tournaments across the globe with the winners securing places in the Grand Finals in Antalya.

Turkish Airlines Chairman of the Board and the Executive Committee, M. İlker Aycı said; “The Turkish Airlines World Golf Cup is an event that we are very proud of and it continues to grow and improve year on year. We are delighted to be holding this event, which has already become a key date in all golfers’ diaries, in Antalya, one of the favorite tourist destinations of Turkey that globally known with its turquoise coast and natural beauties.”

This year has seen Turkish Airlines moved to its new home at Istanbul Airport, a state-of-the-art structure from which the global carrier will continue on its path of expansion. The Star Alliance member airline currently operates to 316 destinations across 126 countries, and from its hub at the center of global aviation, Turkish Airlines allows its valued guests to explore more of the world, as well as Turkey’s impressive golf courses.