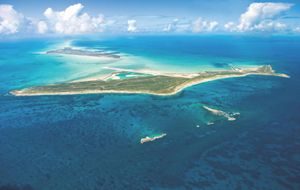 The Turks and Caicos Islands welcomed more than 1.4 million tourists, which is the greatest ever number of visitors the territory has recorded in one year. It surpassed the previous maximum of 1.3 million in 2014 and rose 18 percent from 2017. The Tourism Statistics Report published this week said that the Turks and Caicos Islands also maintained its market share – a marker of the territory’s rapid recovery from category five hurricane Irma.

The cruise ship arrivals accounted for the majority of the visitor population, and showed an increase of 23 percent – which is the highest number of cruise passengers to date. The land-based arrivals saw a smaller growth of six percent during the year. Despite natural disasters Irma and Maria in 2017 the Turks and Caicos Islands has proven itself to be a resilient destination in which tourism continues to thrive, the report said.

The American market maintained its dominant share of total arrivals accounting for 82 percent of the destination’s land based visitors. The increase in the Canadian and European markets were also achieved but more notable was the hike in arrivals from South America and fewer arrivals from other Caribbean nations.

Acting Director of Tourism Mary Lightbourne said that the destination continues to experience impressive growth in both land based and cruise arrivals. The Turks and Caicos Tourist Board will continue to work strategically to market and position the destination as the premier luxury destination in the Caribbean. The report, prepared by the Sharissa Lightbourne, statistical officer of the TCI Tourist Board, also highlighted the growth of the vacation rental market. The vacation rentals such as Airbnb and HomeAway listings increased by 18 percent when compared with 2017. The listings are composed of entire homes, private rooms and shared room rental types.

The Turks and Caicos Islands Tourist Board currently keeps record of all registered properties and their associated room counts for units comprising of four bedrooms or more.

It is seeking to put into place a vacation rental registry that will be able to capture all available accommodation units across the territory.

In the report, senior marketing executive Jennifer Pardo explained that various research has brought to light lack of awareness that the TCI is a chain of islands not just Providenciales.

The Tourist Board attributed the visitor growth to its use of non-traditional mass media marketing strategies in addition to strategic industry partnerships. During the launch of Tourism Environmental Awareness Month on Monday, chair of the Tourist Board Adelphine Higgs-Pitter said now is not the time to be complacent.

According to the Caribbean Tourism Organisation (CTO) Caribbean destinations received a total of 59.5 million visitor arrivals in 2018, comprising 30.2 million tourist arrivals and 29.3 million cruise passenger visits. This represented the ninth consecutive year of increased spending by visitors to the region.

The year-end report presents the industry’s data along with commentary to broaden understanding of the TCI’s collective progress. The primary source of data for the report is the  embarkation/disembarkation card that all visitors to the TCI fill out upon arrival.