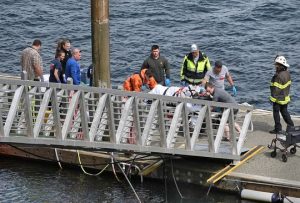 The two floatplanes collide in mid-air over Alaska, leaving five dead, ten injured and one missing. The floatplanes were carrying 14 passengers from a seven-day roundtrip cruise out of Vancouver. The planes collided mid-air about 1 p.m. about eight nautical miles from Ketchikan, Alaska, at the southeastern end of the state.

According to a statement by Princess Cruises, the two planes carried 14 passengers from the Royal Princess who were on a seven-day roundtrip cruise out of Vancouver.

An Otter floatplane with 11 people onboard was returning from a Misty Fjords tour while a second Beaver floatplane carrying five people was on an independent tour. Four cruise goers and one pilot were killed, Princess Cruises confirmed on Monday.

Princess Cruises said: “We are incredibly distressed by this situation, and our thoughts and prayers are with those onboard the planes and their families.”

Princess Cruises is extending its full support to traveling companions of the guests involved.The Coast Guard dispatched helicopters and boats for search-and-rescue operations. The U.S. Forest Service and Alaska State Troopers also responded to the scene. The National Transportation Safety Board said on Monday that it is launching a “go team” to investigate the collision.

This is not the first crash the airline has been involved with. In July 2018, eleven people were rescued after a Taquan Air-operated plane crashed into mountainous terrain on Prince of Wales Island in Alaska.

Ten people were being treated at Peace Health’s Ketchikan Medical Center. One person is in critical condition, three are in serious condition and six people are in fair condition as per Peace Health Communications.