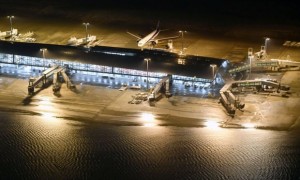 Typhoon Jebi has left a trail of destruction in Japan killing at least 11 people. This was the worst storm in quarter of a century  that devastated the country’s western reaches.

There were evacuation advisories for more than a million people and thousands of air passengers in Japan were stranded in the island airport. So far there were 400 injuries and around 3,000 people were trapped at the Kansai international airport.

Roof panels were dislodged and blown away by the wind, while high-sided vehicles were lifted.

A 100-metre-tall ferris wheel went into a furious spin in central Osaka, even the power was cut off. The fire and disaster management agency issued evacuation advisories and more than 16,000 people  has to spent the night in shelters across 20 prefectures.

In Kyoto Station several people were injured and Japan’s ancient capital saw 10cm of rainfall.Several flights were cancelled and there were seawater flooding in the runway outside and the passenger had to just wait.

There were no reports on when the airport would reopen , a 2,591-tonne tanker at the other end of the road bridge  that connected the airport to the mainland.The crew were unhurt but the tanker was damaged.

Typhoon Jebi moved at a speed of 200km/h and destructed the western cities of Kobe, Osaka and Kyoto before it headed into the Sea of Japan.