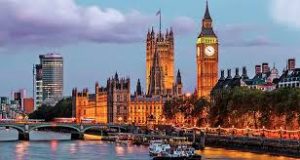 The British government announced that a £330 billion rescue package of loan guarantees to help U.K. businesses survive the economic fallout from the coronavirus epidemic. Speaking from Downing Street, Chancellor Rishi Sunak said government intervention was necessary “on a scale unimaginable only a few weeks ago.”

Sunak said that they have never in peacetime faced an economic fight like this one. The businesses throughout the country have warned of a profound economic downturn in the wake of new coronavirus containment measures that have seen all British people told to avoid public meeting places and work from home if possible, with many firms, especially in the hospitality sector, fearing bankruptcy.

The bailout fund — which will be made available to businesses via government-backed and guaranteed loans — amounts to 15 percent of U.K. GDP and comes in the wake of similar economic interventions in France, Spain and other countries.

Sunak said the loan scheme would be “up and running” next week. The government would go further if required, he added. He said that if the demand will greater than the initial £330 billion that they are making available today, he  will go further and provide as much capacity as required.

For some of the small and medium-sized businesses most at risk of collapse, business interruption loan limits would be increased from £1.2 million to £5 million, with no interest due for six months. Larger firms would be able to access a new lending facility to provide low-cost financing. The package of support also included a three-month mortgage holiday for homeowners.

Small firms in the retail, hospitality and leisure sectors will be eligible for cash grants of up £25,000, Sunak said, while relief from business rates — a tax on business properties — will be extended to all shops, pubs, theatres, music venues, restaurants and other firms in the sector, meaning they will not pay the tax for an entire year. Sunak urged any businesses that were already making decisions to lay off workers to stall such actions and look at the details of the newly-announced support.

The new measures come just a week after Sunak’s first budget statement, which set out an initial £12 billion support package for businesses affected by the outbreak. The Institute of Directors (IoD), representing company bosses, gave the measures a broad welcome.

The Chancellor’s promise to do whatever it takes is the message business leaders needed to hear,” the organization said in a statement.

IoD added that it is now vital to make sure businesses are able to take up the pledges that have been made before too much damage is done. Many have so far felt reluctant to take on loans with the road ahead uncertain.

The opposition Labour party’s Shadow Chancellor John McDonnell said that the package did not go far enough in several areas, noting that there was no support signaled for renters.

People are being laid off today and losing their incomes. We are disappointed that this package does not address their concerns, he said. The further announcements laid out by the Chancellor lack the certainty required amidst growing public anxiety, and still do not go far enough in protecting workers, renters and those who are losing their jobs, or in fully supporting businesses at the scale necessary.

The independent National Institute of Economic and Social Research welcomed the measures aimed at shoring up “shattered” business confidence. But Garry Young, the think tank’s director of macroeconomic modeling and forecasting, said the costs could eventually force the government to sacrifice longer-term spending projects, such as on infrastructure, that Johnson pledged at last year’s election.

Sunak said that by saying he will do whatever it takes, may ultimately find that the costs will extend beyond the 15 per cent of GDP he outlined.