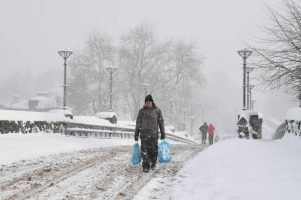 U. K. is bracing for more torturous snow in December.

Weather experts have anticipated snow to fall as polar air smashes into Britain. The temperature is likely to reach below freezing in some areas. The forecast has been issued after this week’s yellow weather warnings for rain, which is applicable for Wednesday and Thursday.

This can result in one to two inches of rain across some areas as the remainder of the storm passes across the UK.

Weather experts say that rain can cause flooding in few parts of the South, South Wales, East and North-East.

Flood is supposed to damage land, roads and properties while travel disruption is also expected.

Met Office has issued warnings for rain for the next few days after some places experience three times their normal rain in the first half of the month.

Colder air is anticipated to arrive at the end of the week, possibly hanging on for the first half of December.”

This was recorded as the coldest temperature of autumn so far, and now conditions look to be returning to normal levels.

As per forecasters, temperatures are supposed to plummet as low as -5 degree Celsius, possible by Saturday night and snow risking in the North.”

The Met Office says that on Friday when warnings for rain will expire, it will turn colder, drier and brighter but with sharp night frosts.

Showers might also occur, which is expected to continue to affect North Sea coastal areas, and some rainfall might clip southwest England on Saturday.

U. K. gets around 33 days of snowfall every year and it falls 3.9 days each year in December