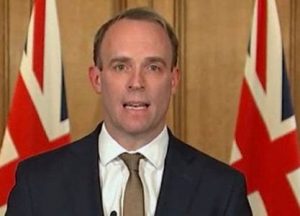 On March 23, the U.K. Prime Minister Boris Johnson issued a nationwide lockdown notice under the term “National Emergency” as a response to the coronavirus pandemic. Later, Mr. Johnson tested positive for coronavirus and was admitted to the ICU for three days.

On Thursday, officials informed that the Prime Minister was shifted from ICU and showed signs of improvement. His deputy, however, said in a statement that it was still early to release the U.K. from the lockdown imposed nearly 17 days earlier as COVID-19 cases across Europe continued to rise.

British Foreign Secretary Dominic Raab addressed the country ahead of the forthcoming Easter weekend and signaled towards maintaining strict lockdown measures further in order to restrict people of the country from undertaking any sort of movement. He mentioned in a press statement that the U.K. is yet to be done with fighting the coronavirus battle and must keep going forward with their actions. He informed that deaths continue to rise and the country is yet to witness the peak of the virus. He said that it is still too early to lift the measures that have already been put to place and urged that the country sticks to the plan to curb the spread of the deadly virus.

According to the earlier measures, the U.K. expected to be free from lockdown restriction on April 13. However, with good weather conditions and the long Easter weekend looming around the corner, British ministers fear that any kind of ease on the measures or any suggestions about alleviating the restrictions could bring an immediate change in the public’s behaviour and enable them to be a part of social gatherings especially on public places.

The British government also took to social media to launch an ‘Easter Stay-At-Home’ advertisement campaign urging citizens to spend the holiday from their own residences, avoiding going out during the occasion, protecting the National Health Service and saving lives during Easter.  Oliver Dowden, Cultural Secretary, the U.K. also urged the public to continue following the lockdown rules. He also mentioned that the current measures are unlikely to undergo any change given that they have just started to have an effect.

Foreign Secretary Dominic Raab, also formed a Cobra Emergency Committee to discuss measures with leaders of the devolved nations. However, no final decision is expected to be made at any meeting in the prime minister’s absence. An official announcement is expected to arrive next week instead.