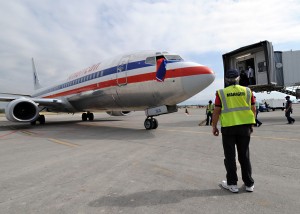 There are two airlines in United States which have resumed service to Haiti as of Sunday, after service was suspended due to civil unrest in the island nation- Haiti.

Both American Airlines and Delta Air Lines have resumed service to the Haitian capital of Port-au-Prince. However, Spirit and JetBlue have both cancelled their flights Sunday to Haiti. All four airlines cancelled flights on Saturday to the island as unrest grew.

The protests were against a government increase in the price of gasoline and diesel. There has been looting and rioting on the streets, with groups setting up roadblocks on many key roads in the country.

The U.S. citizens on the island of Haiti have become trapped where they are as the roads have become unsafe to travel.

The protests have calmed down as the government announced a reversal to the price hike.

In addition to the U.S. carriers suspending service, Bahamian national carrier Bahamasair has announced it is suspending service to Haiti. The airline serves both Port-au-Prince and Cap-Haitien from Nassau. There are no announcement has been made yet for services to resume. The airline cited the safety of their aircrew and passengers for the suspension during the “civil unrest.”

The unrest and cancelled flights come at a bad time for the island nation. The tourism to the Haiti Island was beginning to pick back up after the devastating effects of the 2010 earthquake.

Haiti has become a popular stopping point for cruise ships in the Caribbean Islands. The airline passengers to Haiti still mainly consist of family travelling to visit relatives, as well as support programs from the United States, and around the world helping to rebuild the country.

The resumption of service by American and Delta is a good sign that the airlines believe that the worst of the violence is over.

There are pending any flare ups in violence. The airline service to the country should resume to normal. However, the situation is still volatile. The current government and leadership is unpopular leading to the possibility of future trouble, and along with it more suspensions and possibly cancellations of service.