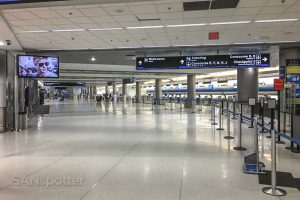 A shortage of Transportation Security Administration screeners has forced Miami International Airport to close its terminal early for three days. The security checkpoints in terminal G (one of six terminals in the airport) will be closed after 1 p.m. on Saturday, Sunday and Monday.

Greg Chin airport spokesman said that “Due to an increased number of TSA screeners not reporting to work, we have decided to take this precautionary step and relocate about 12 flights to adjoining concourses in the afternoons,”

If the shutdown continues, it might not be safe to fly.

Greg Chin said federal screeners are calling in sick at double the normal rate for Miami, and TSA managers aren’t confident they will have enough workers to operate all 11 checkpoints throughout the airport at normal hours.

The government shutdown has left TSA employees working without pay. It raises concern about maintenance of usual standard of security at the airports.

Approximately 51,000 TSA officers are among the 800,000 government employees who are either working unpaid or on furlough and are set to miss their first full paychecks this week.

The airport felt that it is better to err on the side of caution.

The Trump administration and Congress need to make a deal to end the shutdown.