Home » U.S. suspends travel from most of Europe amid coronavirus fears

U.S. suspends travel from most of Europe amid coronavirus fears 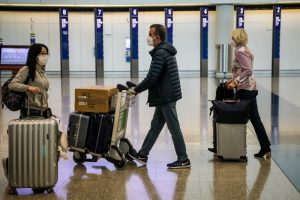 On Wednesday, the U.S. President Donald Trump announced in an official address from the Oval Office that the United States would temporarily ban travel and travellers arriving the country from most places of Europe. The decision comes in light of the novel coronavirus spread across both the U.K. and U.S.

The restriction is set to come into force from Friday, the 13th of March 2020 and continue for the next 30 days. However, the ban would not be applicable to U.S. citizens as well as travellers from the U.K. The restriction would mostly apply to foreign nationals who have visited the 26 countries belonging to the Schengen area.

During the address, Trump said in his statement that the U.S. took a lifesaving decision by taking early action on China and aims to do the same with Europe. He also mentioned that emergency action would be undertaken to provide support to affected workers. He further added that he has urged the Congress to issue $50 billion for small business loans and called for immediate payroll tax cuts.

The announcement came after the number of coronavirus in the U.S rose to 1000 and the death toll went up to 37. In addition, the United States Department of Homeland Security (DHS) mentioned the majorly affected countries in Europe include Belgium, Austria, Denmark, Czech Republic, France, Germany, Portugal, Italy, Iceland, Estonia, Latvia, Hungary, Greece, Norway, Poland, Netherlands, Switzerland, Spain, Sweden, Finland, Estonia, Slovenia, Lithuania, Malta, Luxembourg and Liechtenstein. Chad Wolf, Acting Secretary, DHS mentioned in a statement that the guidance on travel suspension would come to effect in the next two days.

The department further clarified that the restrictions would not be applicable to legal citizens and permanent residents and the immediate family members of U.S citizens. Any kind of goods coming from Europe would also be exempted from the travel restriction.