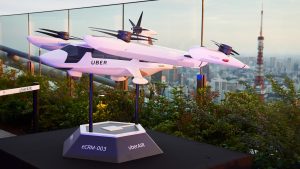 Uber plans to launch trials of its flying cars next year in Melbourne, Australia. It is working to create ‘first world’s aerial rideshare network’. Melbourne is the third flagged by Uber for the new taxi service.

One of the most populous cities in Australia is set to become the first international market for Uber Air, beating out cities in Brazil, France, India, and Japan to join Dallas and Los Angeles, as a pilot location for the project.

The test flights are scheduled for 2020, while commercial operations are set to kick off in 2023.

The aerial route is set to cover 19 km from the Central Business District (CBD) to Melbourne Airport. It will take around 10 minutes instead of the usual journey ranging from 25 minutes to around an hour. The flight is reportedly expected to cost less than U.S. dollars 90, about the same as a trip in a luxury Uber Black car.

The aerial taxi service is set to be launched even sooner than the long-awaited rail link to Melbourne Airport. The rail line will link the air hub to the Melbourne CBD by 2031.

The Uber Air project states that riders can take a special vertical takeoff and landing aircraft (VTOL) which can travel between ‘skyports’ capable of handling up to 1,000 landings per hour. The company is working with five aircraft manufacturers, including Boeing, to design the aircraft for the future rides.