UK Exporters Given Boost With New Heathrow Links To China 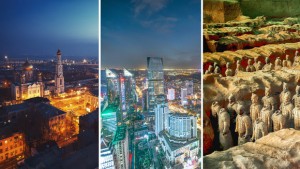 Starting this summer, Heathrow-based Hainan Airlines and Tianjin Airlines will provide the UK’s first direct connections to the growing cities of Changsha and X’ian in 3 weekly services.  Beijing Capital Airlines has also announced it will convert its existing charter operation to a scheduled route to Qingdao,  by providing 2 scheduled weekly services from 26th March. These services will provide more than 217,000  new seats every year for passengers, travelling to and from China, and an additional 6,700 tonnes of new cargo space for British exports.

As the UK’s largest port by value for non-EU trade, Heathrow will be uniquely positioned to make the best of the new export opportunities connectivity to these new markets offers. According to research by Frontier Economics, the new UK connections to Changsha and Xi’an  and scheduled connections to Qingdao will enable £26 million annually in economic benefits through trade and FDI and create 830 direct and indirect jobs in the UK.

Besides being known for its ancient Mawangdui Han Tombs, parks and temples, Changsha is home to more than 7 million people, and is a major commercial and transport hub, with unique local products including Changsha famous tea, stone carvings and fermented soybeans. Xi’an is one of China’s most popular tourist destinations, as the starting part of the Silk Road and home to the Terracotta Army of Emperor Qin Shi Huang.  With more than 8 million residents, Xi’an is an important industrial and educational centre, with major facilities for research and development, national security and China’s space exploration programme.  Well on its way to being classified as a “mega city,” Qingdao is home to more than 9 million people and has been ranked as a “golden city” by the World Bank, due to its investment climate. It is a major port, manufacturing base and home to home to Tsingtao, the best-known Chinese beer export.

As the UK’s Hub airport, Heathrow,  is already the biggest gateway to China, offering more than 100 direct flights to Chinese cities every week. Today, 55 of these go to Hong Kong, 22 to Shanghai, 20 to Beijing, 10 to Guangzhou and two to Qingdao. According to Frontier Economics, these routes already contribute more than £510m annually to the UK economy and create nearly 15,000 jobs.

While connections to Chinese cities are clearly valuable to the UK, rival EU hub airports with capacity to connect directly to 12 other Chinese destinations, including mega cities like Hangzhou, Chengdu, and Kunming, are facilitating more trade and investment to their respective countries. Heathrow’s plans for expansion will allow the airport the capacity to offer up to 40 new long haul destinations, as well as double its cargo capacity – providing the UK with much-needed trade infrastructure at a time when the country is looking to extend its trade relationships outside the EU.

“China is booming and the appetite for British goods is stronger than ever. We are delighted to welcome these new airlines and routes. However, it is clear that the UK’s access to these Chinese market continues to lag behind our European rivals. Our nation’s biggest port is full and new routes from the UK to huge markets like Changsha and Xi’an are sadly the exception not the rule. If the UK is going to be a global trading powerhouse after Brexit, we need to expand Heathrow now – opening up to 40 new trading links that will help all of the UK thrive.”