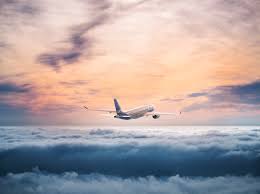 While business class seats have been getting more spacious, comfortable and private over the years, the direction of travel for economy seats has been… less luxurious. The airlines have focused on packing more passengers into narrower seats in configurations up to ten-across.

Occasionally they have created additional legroom by making seats thinner (also conveniently reducing aircraft weight and therefore fuel burn). But broadly speaking, the seats at the back of the plane look much the same as they did throughout the twentieth century.

So how to improve the experience, assuming airlines aren’t about to shift their business model and provide bigger and better economy seats at significant extra cost to themselves.

British company New Territory unveiled one possible answer – adding two wings within the seat back that can be folded out on both sides, allowing passengers to rest their head while also adding a layer of privacy from the seat next to it. The wings are padded for comfort and have lateral support to prevent movement.

They can be manually folded out by passengers, with Luke Miles, New Territory’s founder and chief creative officer, describing it as like “origami”.

It looks like a simple change. But having tried out the prototype yesterday, Business Traveller can confirm it was very comfortable – and would certainly significantly improve the experience if you were travelling solo in an aisle or middle seat in economy or premium economy (where realistically it’s more likely airlines would make the investment).

Especially with the seat reclined, there was a real increase in privacy, and it would allow you to position yourself into a more comfortable sleeping position without feeling like you were intruding on the passenger next to you.

A couple of issues seemed like they could emerge, such as quick wear of the seat from being handled, or movement of the seat for the passenger behind while reconfiguring it. It’s simple but it’s effective. You can have it as a bay creating more privacy, you could have one wing up or neither. The big thing is it gives you the ability to sleep more easily.

Removing the headrest – which, as Miles points out, is something you would rarely have on any kind of seat outside of transport – keeps the seat weight roughly the same or even lighter than existing options.

They are currently trying to retrofit this onto existing premium seats. They have taken the same envelope of foam, basically the back of the seat is just foam and leather, and it’s quite simple. The big change is the introduction of the composite panel, and the wing which allows it to move, but it’s still very lightweight because we’ve removed the headrest. The team has worked with SWS to make the design certifiable, and they say they are currently in discussions with several airlines about potential retrofits.

The difference with some other new concepts is that since the wings would be retrofitted onto existing seats, it would cut back on waste and the time taken to install.