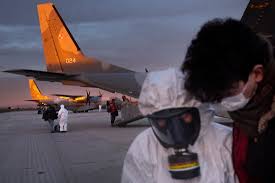 On Tuesday, Britain requested all of its citizens in China to evacuate the country on an immediate basis due to the outbreak of a respiratory problem from a new virus, as Belgium turned out to be the recent addition in the list of countries to announce a confirmed case.

A recent advisory issued by the U.K. Foreign Office explained that while commercial flights remained available from China, travel restrictions imposed by the Chinese government to hold the epidemic meant “it may become harder to access departure options over the coming weeks.”

The advisory said that if you’re in China and have the option to leave, you should do so.

Also, France issued an advisory against all sorts of non-essential travel to China and recommended all French citizens who were already there to return home, right away!

Over 20,400 people have been infected with the virus in China and about 425 cases of death confirmed. In the Philippines and Hong Kong, two other people have died and 20 other nations have reported cases.

Belgium, in the meantime, has reported its first case of the coronavirus. The virus has been found in one of the nine citizens who were repatriated from Wuhan over the weekend. The Belgian Health Ministry has explained that the infected individual was in good health and had no symptoms of the disease. The person was taken to a special hospital for further care while the others remained under observation.

So far, Germany has confirmed two more cases of the virus: one was an employee of an auto parts company that a Chinese colleague visited two weeks back and the other in a child of an infected company employee who previously had another child test positive.