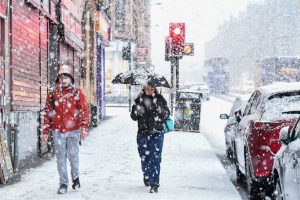 Britain is facing a week of unsettled and unpredictable weather, in which the country could be hit by snow and gales of up to 70mph. The Met Office has warned of a week of unstable weather which is making accurate forecasts difficult and running models just hours apart can make “a big difference”. However, this weather warning has issued weather warnings for the west of the UK starting on Wednesday and reaching into Thursday, with gales of up to 70mph expected to cause disruption.

Meanwhile snow has fallen on parts of the northeast – with the potential for more predicted across for the rest of the week.

Looking into the week, it is going to be windy and wet with snow reaching parts of Scotland, Cumbria and Northumbria and westerly winds bringing in rain and possible sleet. There will be an unsettled couple of days coming up but tomorrow will see quite dry conditions, except for Scotland which could see some snow, but only in mountain regions.

A band of rain will push into southeast England Tuesday evening, which will fall for 24 hours from midday Tuesday. The southeast can expect 25mm of rain, especially in Kent. Tuesday is going to be grey and damp with a cloudy start.

The Met Office expects the weather to become more erratic as of Wednesday, bringing stormy conditions.

Mr Partridge continued that it is going to be a period of unsettled weather. On Wednesday morning it will be freezing and foggy but in the evening it will be mild and rainy.There are wind warnings in force for Wednesday for the west of the country stretching from Northern Ireland, parts of western Scotland, western Wales and the southwest of England, from around 2pm Wednesday until 3am Thursday.

The people can expect gusts of around 60-70mph, especially in coastal areas which are unsheltered. The wind is also likely to bring in a band of rain across the U.K.

Snow has already begun to fall across parts of the northeast – including the Yorkshire dales and County Durham, which were dusted in a blanket of snowfall across Monday. And with Christmas less than 10 days away, suggestions the U.K. may see snowy conditions have seen Ladbrokes slash the odds of White Christmas twice this week.

The Met Office’s current position is that the chance of a white Christmas is slim with “temperatures expected to remain above average”.