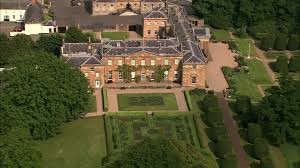 Michael Ellis visited the historic building as part of a two-day trip to Northern Ireland to see how businesses and attractions are working to encourage more visitors to the region. Hillsborough Castle will reopen to the public as a year-round tourist destination next Easter following a £20m refurbishment.

Historic Royal Palaces, which took over the management of the castle in 2014, wants to increase the number of visitors from about 5,000 to 200,000 next year. It plans to target key international markets such as China and the United States, as well as local audiences in Northern Ireland and Ireland.

Mr Ellis, UK Minister for Arts, Heritage and Tourism said that the transformation of Hillsborough Castle into a major international tourism destination will bring a huge boost to the region.

This project not only preserves the history of this 300-year-old castle, but is creating local jobs, supporting local businesses and contributing to the Northern Ireland economy. Patricia Corbett, who is head of Hillsborough Castle, Historic Royal Palaces, said that they look forward to welcoming visitors from around the world and to share with them the fascinating stories of Hillsborough Castle and its remarkable history.

She added that there is huge potential for the tourism sector in Northern Ireland and we recognise the wealth of opportunity not only in the local domestic market but also markets from further afield such as America and emerging markets in the rest of the world like China and South America.”

Inbound tourism in Northern Ireland was worth almost £215m in 2017.