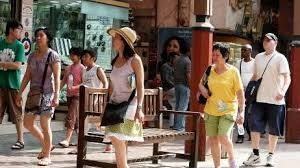 China “continues to lead global outbound travel,” as per a report that was published by the United Nations World Tourism Organization (UNWTO) on Monday.
Entitled “The UNWTO Tourism Highlights 2018 Edition”, the report noted that Chinese tourists spent approximately 258 billion U.S. dollars on international tourism in 2017, almost one fifth of the world’s total tourism spending.
The UNWTO report asserted that overall international tourist arrivals grew by 7 percent to 1,323 million in 2017, the largest rise since 2010.
The growth in arrivals was echoed by a strong increase in exports generated by tourism, which reached 1.6 trillion U.S. dollars in 2017.
The UNWTO explained that the 2017 results were “driven by sustained travel demand for destinations across all world regions, including a firm recovery by those that have suffered from security challenges in recent years.”
The organization also highlighted how the economic recovery of economies such as Brazil and Russia benefited both advanced and emerging destinations.
France continued to be the most popular tourist destination with Spain moving into second place, while Japan moved into the top ten earners from tourism “after six straight years of double-digit growth.”
Available data for early 2018 has confirmed international tourism continues to grow this year with a 6 percent year-on-year increase for the first four months of the year.

Spain might bring back Covid-19 rules before summer holidays

At least 6 killed as Marmolada glacier in Italy collapsed