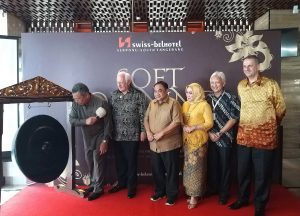 Representatives of PT. Merdeka Ronov Indonesia, including its Commissioner, Margiono; Chief Operating Officer, Ronaldo Maukar; and two members of its Board of Directors, Novi Imeli and Iswara Darmayan attended the event.

The new hotel will be located within the Intermax complex which is a mixed-use development comprising offices, residences, conference facilities and commercial space.

The contemporary hotel will be ideal for corporate travellers and is just a few minutes’ drive from the main toll road.

One can easily  reach the hotel downtown Jakarta and Soekarno-Hatta International Airport.

There are 107 contemporary rooms and suites in the Swiss-Belhotel Serpong equipped with home comforts and intuitive amenities for business travellers.

There are six flexible functional spaces where one can host a variety of business and social events. For large-scale function there are 670-square metre ballroom, it include corporate conferences, award ceremonies and gala dinners.

There are five meeting rooms can accommodate between 15 and 100 guests.