US President Trump signs $8.3bn aid bill as cases increase in the country 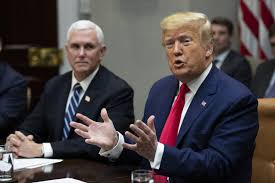 The White House has faced criticism for its response, and has acknowledged the US does not have enough test kits to meet rising demand.

Results are being awaited of tests on passengers on board a cruise ship being held off San Francisco, California.

Dozens of passengers were tested on Thursday after a passenger died and at least four others became infected on a previous voyage by the ship, the Grand Princess.

More than 100,000 cases of the coronavirus cases have been confirmed worldwide and over 3,400 deaths, according to data collated by Johns Hopkins University. The majority of cases and deaths are in China, where the virus first emerged in December.

The package marks a substantial jump from the $2.5bn proposed by the White House last month.

The president is expected to pay a visit to the US Centres of Disease Control and Prevention (CDC) in Atlanta – the frontline agency for the country’s coronavirus response.
Speaking to media on Friday, Mr Trump repeated his claim that the US cases have been limited “because we have been very strong at the borders”.

California Governor Gavin Newsom has refused to allow the ship to dock until its passengers are properly assessed. Test results are expected later on Friday.

There are 142 Britons among those aboard the ship, which is returning from a voyage to Hawaii after a trip to Mexico last month.

In a statement, the company that operates the ship said samples had been taken from 45 people – both guests and staff – and that all passengers had been confined to their quarters pending the outcome.

Image captionThe Grand Princess, one of the world’s largest cruise ships, is being held off the Californian coast

A man who sailed on the Grand Princess to Mexico died of coronavirus on Wednesday.

The 71-year-old from the Sacramento area had underlying health conditions, officials say.

Two other passengers from that voyage are in hospital with the virus in northern California while two Canadians who recently sailed on the ship tested positive after returning home.

Another US passenger from the Mexico voyage, Judy Cadiz, said she and her husband had fallen ill after returning but had not given it much thought until learning of the death.

Now they cannot get a straight answer about how to get tested, she was quoted as saying by the Associated Press news agency.

“We were in Sacramento, we were in Martinez, we were in Oakland. We took a train home from the cruise. I really hope that we’re negative so nobody got infected.”

Thirteen of the 14 US fatalities were from the same nursing home in Seattle, Washington State, but infections have been reported across 20 states.